The Network Navigator integrated directly in the data administration interface supports rapid and straightforward graphical visualisation and bidirectional communication with the object data of the network elements. Visual verification of the network elements is tremendously simplified with the optional integration of background maps. Standardised sewer interfaces such as ISYBAU in the 01/96 or 06/01, ISYBAU 2006 XML or also DWA M 150 formats are available for the import and export of sewer source data and sewer inspection data.

The external files in the formats mentioned above can also be tested prior to the import regarding the format and/or schema and according to content criteria. After the import, plausibility routines are available to, among other things, point out differences between the master data recorded during the inspection (e.g. street, profile details, material) and the existing source data.

Sewer inspection data can be imported and administered for specific contracts. For one thing, this approach makes it possible to administer any number of inspection data for sewer objects from different times (history administration). For another, different sets of standards, for example inspection data with DWA M 143-2 or DIN EN 13508-2 abbreviations, can be administered in parallel. Next to project data specific to the municipality (e.g. local districts, streets etc.), inspection texts specific to sets of standards (e.g. ISYBAU 06/01, DWA M 143-2, DIN EN 13508-2, etc.) are also managed in the libraries which are not project-specific.

Review of the visual inspection data

Directly after visual TV inspection data are imported (e.g. ISYBAU 01/96 or 06/01, condition data collective ISYBAU 2006 XML or DWA M 150 type B), a schematic condition graphic can be created without corresponding source or geometry data and used for verification of the imported inspection data. Identified errors can then be corrected directly in the schematic graphic through interactive database access.

Specific damage can be seen in digital videos of a visual inspection for single damage sites in the pipe diagram. The pipe diagram serves as the navigator for the respective inspection video. Players of other manufacturers such as Panoramo by IBAK are naturally supported for the media viewing of specific damage as well. Analogue videos on VHS or SVHS video tapes can also be controlled precisely for each single defect with the PANASONIC AG 730 video recorder via the computer’s serial interface.

The display of single defect photos from the schematic pipe diagram is supported in numerous raster formats (including tif, gif, jpeg). Any number of damage photos can be administered per inspection text. Individual digital photos can also be taken from an inspection video using a snapshot function and assigned to the corresponding single defects. (Figure 1)

After the import of manhole inspection data according to DIN EN 13508-2 via the DWA M 150 or ISYBAU 2006 XML interface, a schematic condition graphic in the form of manhole processing can be created without corresponding source data and used for the verification and review of the imported inspection data. Identified errors are then corrected immediately through interactive database access and the graphic is subsequently updated. (Figure 2)

The connections recorded during the manhole inspection, and accordingly all incoming and outgoing pipes (sewer segments and service pipes), can be reconciled with the source data and displayed. Thus the user is able to perform immediate quality control regarding the location and number of the recorded manhole connections.

Sewer network operators often have insufficient and incomplete information available to them about the type, location and function of service pipes. This information can be verified, amended and if applicable corrected in the course of visual inspections of service pipes that are being carried out more frequently due to Section 61a LWG NRW. A graphical tool is available for this purpose, comparing the existing connection information to the connection information from the visual inspection in a schematic graphic. (Figure)

If an assignment is not possible due to designation differences between the source data and the visual inspections of the service pipes that have been completed, convergence can be realised easily through the graphical interface.

Carrying out a condition assessment

In order to quickly obtain an overview of the condition of a sewer network based on the extensive data from a visual inspection, and to establish a basis and priorities for required measures, BaSYS Condition Inspection and Classification offers all common civil engineering condition assessments.

The civil engineering condition assessments ISYBAU 01/96, ISYBAU 06/01 and DWA M 149 are available for the DWA M 143-2 code-decode system. For the DIN EN 13508-2 abbreviation system, the supported civil engineering classifications are ISYBAU 2006 and DWA M 149-3. After classification, all of the classification results are administered in a clear layout using corresponding detail screens and are then available, for example, to generate reports or for output to Excel. 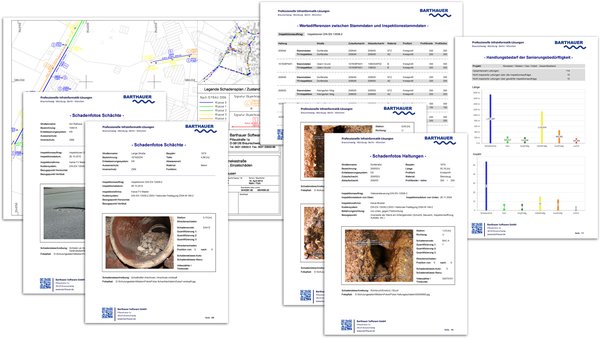 The results of a condition assessment can be viewed and output in various forms in BaSYS Condition Inspection and Classification. Standardised reports are available for output. Custom reports can also be defined using the integrated Report Designer. Output to Excel is supported as a matter of course.

The aforementioned pipe and node graphic can be conveniently sent to the printer for series printing at the push of a button. Various layouts are available for this purpose.

Within the individual inspection view, colouration by damage texts and control texts can be performed after carrying out a condition assessment. It is also possible to choose between the evaluated single damage classes depending on the respective classification method (DWA or ISYBAU).

Furthermore, two TV inspections can be viewed side by side in parallel thanks to the inspection history administration integrated in BaSYS. For example, an initial inspection can be compared to an acceptance inspection.

Theme plans with different layouts and scales are available for the output of damage and condition assessment site plans.