Highly modern technology and innovative IT in Meppen 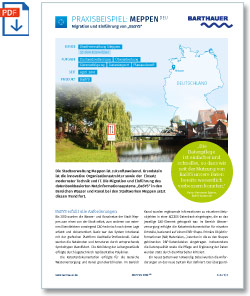 The Meppen municipal administration is trendsetting. An innovative organisational structure and the use of highly modern technology and IT form the foundation. The migration and implementation of the database-supported network information system “BaSYS” for water and sewer management by the Meppen municipal utility continues this trend.

BaSYS meets all requirements
Until 2010 the water and sewer networks of the city of Meppen were mainly recorded and documented according to their location by the city itself and by external service providers using CAD technology. The Interkanal system with the geographical platform GeoMedia-Professionell formed the basis. The network nodes and fittings were classified by corresponding symbol types. Courses of lines were illustrated using representative polylines showing the locations.
Cadastre documentation was fundamentally different for the water supply and sewer networks. In the sewer area, supplementary information on individual network objects was entered in an Access database linked to the respective CAD element. For the water supply, the cadastre documentation for individual local districts was based on an ESRI shape. Primary object information (network, materials...) was entered in the DBF data files belonging to the shapes. The data quality as well as maintenance and editing of the data in particular were always criticised by the employees.
A new system was needed. The requirements for the new system were clearly defined. According to Operations Manager Heinz-Herrmann Egbers of the Meppen municipal utility, the leading objective was to replace the existing GIS system, thereby significantly simplifying the correction and amendment of sewer and water data. This not only includes the trouble-free collection of condition data, for example after camera inspections, but also their classification. Maintenance and support also had to be significantly optimised, the network structure revised and the import of data via interfaces realised.
The network information system BaSYS was able to meet these requirements. This is why the Meppen municipal utility reached a decision in 2010 to implement its water and sewer network cadastre with the network information system BASYS 8.2.

Data backup and migration
After the decision in favour of BaSYS was made, the migration order was issued in April of 2010. It was realised by Barthauer Consulting in just one month. In the course of the data migration, the layout of the pipes, network nodes and network controls were derived from the graphical data (DNG, SHP). Insofar as further information on the graphical objects was available in the databases and DBF files, these were read as well and the corresponding objects transferred into the BaSYS system. In this migration stage, 100 per cent of the documentation developed in previous years was secured for use under BaSYS. Initial training with the new data was carried out as early as June of 2010.

Data analysis and consolidation
The old databases contained hardly any reference information on saved network model derivations. This posed a problem for using the networks for extended planning and cadastre tasks. Topology queries on network routes, exclusion zones or alignment sections cannot be researched without this information. These are required for example in order to output longitudinal sections or for service connection localisation. In order to prepare the data for these future tasks as well, not only the network nodes but also the network controls for the mains and service pipes as well as all primary and secondary controls were analysed by means of topology approximation analyses. This allowed the respective unique network relationship and substation assignment to be calculated and the resulting network references to be transferred to BaSYS. Thanks to this approach, the time-consuming and error-prone manual revision of the network was avoided. Various inconsistencies were also identified at the same time and corrected immediately.

The link between NIS and GIS
In the area of cadastre and property services, a WMF-supported WEBGIS with ALB link was already on hand. Unfortunately the provider of the WEBGIS did not support a direct link to AutoDESK products. BARTHAUER Consulting solved this problem by developing a corresponding FDO plug-in. Now the previous WMF services on the one hand as the digital base map for the city can also be used in AutoCAD. On the other hand, targeted ALB queries (land parcel, owner...) can now be processed in bidirectional dialogue with the existing ALB system.

Fit for the future
With the introduction of BaSYS, the technicians in Meppen now have access to a database-driven network cadastre integrated in AutoCAD with a complete WEBGIS system. Not only does this allow all desired engineering documentation, planning and information services to be processed. The latest standards and methods for the data processing of network cadastres can be fully met as well.

“Data maintenance is simpler and faster, so that we have already been able to significantly improve our data since we started using BaSYS.”   Heinz-Herrmann Egbers, BaSYS user