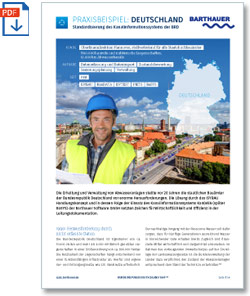 20 years ago, maintaining and administering sewer systems presented an enormous challenge for the state building authorities of the Federal Republic of Germany. The solution through the ISYBAU action plan and the subsequent implementation of the sewer information system KanDATA (later BaSYS) from Barthauer Software GmbH set the standards for economical and efficient network documentation.

1990: Challenges of unrecorded data
The Federal Republic of Germany owns approximately 70,000 civil and more than 4,000 military use properties on a scale of around 800,000 hectares. A functioning infrastructure is a key factor in maintaining the usability of the properties. This requires dedicated supply and disposal networks, e.g. sewer networks. The sustainable use of water as a resource is intended to ensure that an adequate supply of water in sufficient quality is maintained for future generations. At the same time, financial resources have to be used economically and purposefully. Within the scope of preventive environmental protection based on the state water laws, the federal administration in the states is obligated to maintain state-of-the-art sewer systems.(1)

There are more than 12,000 kilometres of sewers in total on the properties. Networks that need to be inspected, maintained and rehabilitated in order to bring them up to an environmentally sound state. In some cases, properties that are no longer used by the military since reunification are to be converted to civil use. The sewer data come from the governmental engineering administrations of the 16 federal states. Furthermore, the administrative agencies work together closely with service providers such as engineering and inspection firms as well as the construction industry. Data have to be transferred to and from external contractors on an ongoing basis. There are numerous data formats from before 1991, especially in regards to sewer condition. Redundancies in data storage make the work more difficult and less economical. 1) Source: Sewage directives, foreword to the second edition

From chaos to a concept
Resolving the problem of numerous data formats is urgent to avert data chaos across the country. Efficient administration is not possible under the current conditions. At the beginning of the nineties, the ISYBAU Wastewater Workgroup is formed by representatives of the federal government and the states. It commissions the ITWH (Institute for Technical-Scientific Hydrology) in a consulting capacity to help develop a uniform data transfer format for sewer data. A representative survey of the software companies in the market at the time (including BARTHAUER) is intended to establish the broadest possible basis for the requirements imposed on such a universal interface. The results serve as the basis for the new data transfer format. The ISYBAU action plan of the ISYBAU workgroup and the first ISYBAU exchange formats are a milestone in the standardisation of workflows for wastewater. Originally conceived only to meet the needs of the federal government, ISYBAU is quickly adopted by the technical community.<STRONG/>

Systematic overview
But without systematic data collection, managing the partial networks on the many properties is hardly feasible. The demand for professional network management is becoming more and more urgent, so that OFD Hanover as the representative of the state building authorities issues a Europe-wide tender for the delivery of a sewer database.

Software development for sewer databases is still in its infancy in 1991: a handful of programmers have dedicated themselves to developing software for civil engineering and geoinformatics. But who will be able to meet the rising requirements of the market and assert themselves over the long term still remains to be seen.

Investing in a uniform German-wide sewer information system is risky, since several hundred workstations have to be installed and at least as many users need to be trained. The future provider requires innovativeness and a suitable software infrastructure in order to implement the high demands of the client in practice. Furthermore, the new sewer database has to handle the import and export of the recent ISYBAU format.

And the winner is: BARTHAUER
In 1991, OFD Hanover as the representative of all state building authorities decides on a general license for the KanDATA sewer information system from the Braunschweig software provider owned by graduate engineer Jürgen Barthauer. Key points in favour of the decision are the good price-performance ratio of the Braunschweig company and the willingness to develop subsequent adaptations. The BARTHAUER sewer information system is implemented across Germany on the MS-DOS operating system in 1991. At the same time but unrelated, the Braunschweig software provider is transformed into Barthauer Software GmbH. Several employees with different specialisations such as informatics, engineering and geography work hand in hand on the continuous further development of the software, adapting it to the requirements of the state building authorities.

BARTHAUER employees provide training for users and trainers across Germany. The interdisciplinary team implements an extensive project with around 250 workstations. In those days, the BARTHAUER trainers are always on the road: User training in 16 federal states with nearly 300 participants is on the agenda, along with technical IT consulting and integration with existing software systems.

Barthauer Software GmbH as the software provider is indirectly involved in development and implements the format in practice. Now a software that handles the new, uniform format perfectly is available to all network operators and planners. The ISYTEST module ensures independent quality control. ISYTEST examines ISYBAU data to ensure there are no ISYBAU format errors. This means that both clients and contractors can be sure: If it says ISYBAU, it is ISYBAU!

1996: The ISYBAU Format is Updated
With the redesigned new ISYBAU format, experience with using the 1991 format is taken into account. The format is adapted to technical developments and "teething troubles" are eliminated.<STRONG/>

1998: From DOS to Windows – everything becomes simpler
Software technology developed rapidly in the preceding years. The Windows operating system has asserted itself among private and professional users. In 1998, the first Windows version of the BARTHAUER network information system is released under the name BaSYS. In BaSYS, users can work with a familiar user interface that makes navigation easy. OFD Hanover is convinced and once again chooses to use the BARTHAUER software under an upgrade contract in 1999.

The train-the-trainer concept prepares coordinators in the federal states for their role as contacts for BaSYS. And the concept works: From 1991 to 2000, all the state building authorities in Germany record their sewer networks in BaSYS.<STRONG/>

ISYBAU gains popularity
In the meantime, the ISYBAU exchange formats support the uniform and consistent exchange of all sewer data. The ISYBAU action plan has proven itself and other specialist fields are enquiring about it. This is why the ISYBAU formats are extended with additional data structures. The workgroup publishes the sewage directives and therefore makes practical implementation by external contractors easier.

In the years that follow, the directives keep being expanded and adapted to ongoing technical and data processing developments. At the software level, the ISYBAU formats and evaluation programmes continue to be implemented in close cooperation with BARTHAUER.

BaSYS 8: Specialists become market leaders
The next version of BaSYS is ready in 2007 and really makes the competition take notice. At this time, it is the only network information system that fully reflects the nationwide format in its data structure.

BARTHAUER has not only proven itself in the market but also features unrivalled technical depth, intuitive operation and flexibility in application. OFD Hanover once again chooses BaSYS and enters into a master agreement for BaSYS 8. The remaining federal states, who acquire their management software themselves under this contract in the meantime, also choose the uniform solution from BARTHAUER.

2006: ISYBAU goes Europe
In the meantime, the ISYBAU data exchange format has become the natural coding language in the German-language wastewater sector. The European Directive DIN EN 13508-2 is introduced in 2006. It regulates the uniform classification of disposal networks across Europe. Now uniform codes can be assigned to damage across the EU and comparisons are possible.

The ISYBAU exchange format is adapted to the new requirements and reinvents itself: ISYBAU XML (extended markup language) is born! The new system is more flexible, able to dynamically adapt to altered data structures, and therefore also able to support the European Directive. Even though ISYBAU XML was conceived solely for the properties of the federal states, the concept attracts great international attention.

And BaSYS?
BaSYS is not merely the first system to implement a compliant interface directly after the introduction of the new format. It is also exemplary at handling the conversion between ISYSBAU XML, older ISYBAU formats and other data formats on the fly. This makes it possible for users to be flexible and save time in their work, consistently over more than a decade subject to various project constraints.

PIETS, the programme that succeeds ISYTEST, is once again used as the official test software of the state building authorities. It examines ISYBAU-XML data for formal and content plausibility, converts old ISYBAU formats to the new XML format and permits users to edit and correct the data directly.

Engineering and inspection firms using BaSYS have a clear competitive advantage, since BaSYS is built from the ground up so that it can easily integrate new "format languages". Therefore it offers a high degree of interoperability.

BaSYS goes international
All of this is not limited to Germany! BaSYS has been available worldwide since 2008 in many languages, e.g. English, French, Italian, Portuguese and Polish, and is supported by a network of international partners.

On this occasion, we would like to thank all federal and state finance and building administrations for their confidence in us and for many years of constructive collaboration.