KASSELWASSER: Implementation of a GIS for sewer data with BaSYS Web 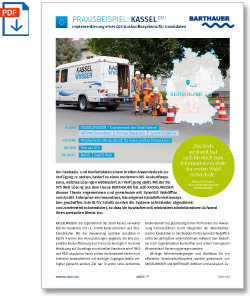 Making geodata including spatial base data and spatial thematic data available to a broad user group requires a modern GIS with a web-based information retrieval system. KASSELWASSER addressed this issue with the BaSYS Web solution from BARTHAUER, creating an innovative in-house sewer information system jointly with SynerGIS WebOffice and ArcGIS Enterprise. The systems were harmonised and increasingly automated over time, so they now provide their valuable service with minimal administrative effort.

KASSELWASSER, the city of Kassel’s owner-operated municipal enterprise, administers 820 km of sewer networks with around 23,000 sewer shafts and road gullies. With the use of spatial geodata in BaSYS 9, all conditions were met for replacing the old, proprietary information system with a web solution using modern technology on the basis of current standards such as HTML5 and REST. This was intended to make the network data available to an even broader group of users with easier access. Ease of use with simultaneous high application performance was the primary goal. Integration of the database-driven sewer data into the WebGIS portal SynerGIS WebOffice would minimise administrative effort while meeting the need for information accurate to the day and a homogeneous state of knowledge.

Important basic conditions and workflows for an efficient sewer information system were jointly defined and analysed by KASSELWASSER and BARTHAUER. Integrating the data from BaSYS Web into the WebOffice user interface came first. In an initial step, all sewer maps were to be supplied from the current database, controlled by the technical information system BaSYS Web Sewer. The sewer map primarily used in CAD to date was provided as an ArcGIS Server service by means of ArcGIS Desktop and the BaSYS-Plan E module in order to accomplish this. Problems were initially encountered here due to the representation optimised for CAD, which was not very user-friendly in the GIS. Continuing to work with just one configuration for CAD and GIS was the goal. This goal was achieved after a detailed analysis by simply implementing a colour shift for the GIS publication.

In production use it turned out that live access by the ArcGIS Server to the sewer geodata was associated with a major loss of performance. An automatic transfer of the data to an ESRI geodatabase was therefore realised using the ArcGIS Python API prior to publication on the ArcGIS server. This transfer runs unattended every night.

In the next step, a highly functional GIS portal with SynerGIS WebOffice was set up based on the aforementioned ArcGIS server service, providing the full GIS functionality from simple navigation to address search, redlining etc. to automated plot output along sewer routes. Via the linking of external applications integrated into WebOffice, the full GIS functionality of the BaSYS Web services was then integrated seamlessly into WebOffice. Not only does this allow users to obtain detailed technical information directly from the BaSYS database, they also have access to various graphical reports such as the interactive inspection graphic and flow path tracing with various termination criteria. User friendliness was optimised according to the customer’s wishes through the intensive use of the WebOffice and BaSYS Web JavaScript APIs.

All participants are extremely satisfied with the current project results. Thanks to intensive and constructive cooperation, the application successfully went live in 2017 and its performance is rated as extremely good by all participants. Switching from the Oracle database platform to MS SQL Server was successfully realised in the interim as well. KASSELWASSER is the sole operator of the system. BARTHAUER is the system service provider and Geoventis the service provider for WebOffice configurations. Further optimisation is planned, such as the integration of sewer videos on the web and linking to WebOffice user administration, and will be initiated in a next step.